Alive (as Utsuro)
Deceased (as Shouyou)

We can suffer by trying to resist the weakness and change ourselves. We are free creatures.

Yoshida Shouyou was the head of a private school named Shouka Sonjuku and most notably the master of Sakata Gintoki, Katsura Kotarou and Takasugi Shinsuke.[1]

Yoshida Shouyou was amongs the seven personas created by Utsuro, a human who gained immortality due to the high amounts of concentrated Altana in his body. With his his high vitality and strength, he founded the Tenshouin Naraku, the covert ops squad that was loyal to the whatever government was in power at the time. For 500 years, Utsuro committed various acts of bloodshed and through various iterations of life, lead the Naraku through 30 different generations. After a long time, Utsuro decided to try and impart some good on the world after killing for so long, and defected from the Naraku during the Tokugawa reign. As a result, Yoshida Shouyou rebelled the Utsuros manage to resurfaced to the real world and completely took over Utsuro's body, especially able to save a young Oboro from death. It was after the burning of Shouyou's corpse that his immortality was made apparent to the other members of the Naraku. Curiously, he seemed to regain his original persona after this persona kills Shouyou on the inside, after killing the other six of his personas. He was taken away by the Tendoshuu after his revival, he offered to give his immortal blood to the Tendoshuu in exchange of power for destruction, thus becoming a member of the Tendoshuu.

According to Gintoki, Shouyou was (along with Gintoki himself) a drifter. Shoyo first met Gintoki in a deserted battlefield as a child searching for leftover food among corpses. Impressed by Gintoki's will to survive, he gave Gintoki his first lesson: a sword swung in self defense, while fearing others, should be thrown away. He threw his sword to Gintoki, offering to teach the child the proper way of using the sword. Attracted to Shouyou's words, the boy decided to follow him to his private school (named Shouka Sonjuku) where he taught poor children without charging them anything. Some time later, while looking for Gintoki, who had been slacking off, Shouyou saved Katsura Kotarou and Takasugi Shinsuke from being bullied by a group of their seniors.

After visiting Shouka Sonjuku for some time, the two boys grew bored with their current education. Upon hearing the rumors about the school and the government officials' attempt to destroy it, they defended the place with Gintoki, but Shouyou protected them and they decided to study under him since then. During that time, one of the lessons Shouyou taught them was that the sword should not be swung to cut down enemies and one's weakness, but to protect the holder's soul.

Shouyou was a popular teacher to the students until the Kansei Purge happened. He was found by Naraku, and was accused of creating gatherings that could create dissenters, thus leading to him being arrested by the Tendoshu. Gintoki, who was tied down, watched helplessly as Shouyou was taken away. While being taken away, Yoshida Shouyou left everything to Gintoki's care. He promised Gintoki that he would come back and he asked his student to protect his comrades before he returned.

Not long after his arrest, Gintoki, Katsura and Takasugi rose up as the last warriors of the Old Jouishishi and joined the Joui War, as a desperate attempt to rescue their teacher. Unfortunately, Shouyou was executed by Gintoki himself when he was forced by his enemies to choose between decapitating him or letting his fellow comrades be killed. Although Shouyou and him gave each other one last smile, with him being grateful that Gintoki kept his promise to protect everyone, this loss left them in despair and they were brutally left to face his decapitated head.

As his body burns, he was found standing up within the flames with a cold smile on his face, implying that he had returned to his original self as Utsuro. Since his head was given to his students, it was clear that he grew another head. In reality, inside his body, Shouyou's mind, along with other six Utsuros are destroyed by the original Utsuro, before resurfaced to the real world once again.

Throughout the series, Yoshida Shouyou was shown to have great influences on Gintoki, Katsura and Takasugi. His teaching was so important to both Katsura and Takasugi that they still carry the textbooks with them as adults, with the books ironically saving both of them later. While Gintoki claimed to have spilled ramen over the book and threw it away, it is evident that he keeps his respect and gratitude to Shouyou in heart.

Moreover, his death had greatly affected his three students. After the Joui War, Takasugi became willing to destroy the world, seeing his teacher's death as a proof of the world being unbearably corrupted. Katsura claimed that he once shared the desire to destroy the world too, but realized that there were many people he cherished and wanted to protect; in doing so, he believed that there would be a way to change Edo that would not sacrifice many lives, saying that was what Shouyou would have hoped for if he was still alive.

As for Gintoki, he was said by Katsura to have taken the death of Shouyou the hardest because of Gintoki's actions. Greatly respecting Shoyo, he believed that Jiraia's cowardice and his attitude towards Tsukuyo had dishonoured the titles of a mentor and teacher during the Red Spider arc. In addition, Gintoki had also shown a dark side, in which he wants to slay anyone related to his teacher's death.

Shouyou's appearance is very similar to that of Katsura. He has long brown-ish grey hair and grey eyes. He also wears a grey robe and a haori. 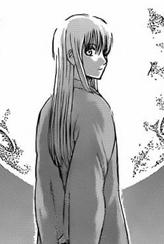 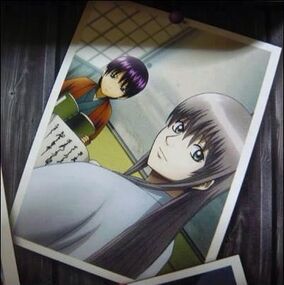 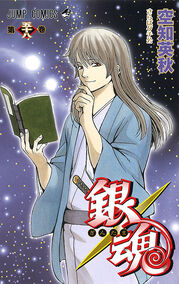 A kind and gentle man, Shouyou was the kind of man who remained in his students' memories long after he died. Well known for his ways, he always extended his hand to children and possibly adults: Gintoki was outwardly adopted by him and the poor children who attended his school were always welcomed for free.  He supplied his own books and even was shown teaching Imai Nobume his lessons despite the fact that they were, for all purposes, enemies. When Takasugi and Katsura started coming to his school, he wasn't fazed at all, even welcoming Takasugi despite his eagerness to defeat everyone there in Kendo and even treated him just like Gin.  Noticably, Gin was allowed to sleep during lessons and Shouyou didn't ever seem to mind, and when Katsura attempted to defuse a situation by making rice balls for everyone, Shouyou ate several and assisted in calming Takasugi and Gin.

But, like all Gintama characters, Shouyou has a peculiar trait: being capable of knocking people literally into the ground with a single tap on their heads.  He always uses this technique when berating or warning his students when they go out of their way to do something for him (like attacking the government officials looking for him, or when Gintoki attempted to save his future friends from bullies), always saying with it "You're a 100 year too early to [current situation]".

In all aspects, though, it's clear to see why Gin and Takasugi went the paths they went on after Shouyou's death: Gin had lost his father, and Takasugi lost the only person who could understand him.

As he was revealed to be Utsuro's good personality, Shouyou has a strong willpower to control Utsuro's body upon seeing the way of error for Utsuro and the other six personas had done, trying his best to redeem himself while using Utsuro's body for a greater good.

Retrieved from "https://gintama.fandom.com/wiki/Yoshida_Shouyou?oldid=53138"
Community content is available under CC-BY-SA unless otherwise noted.