Yamazaki Sagaru (山崎 退 Yamazaki Sagaru ), formerly nicknamed as Mountain Zaki, is a spy working for the Shinsengumi. He himself confessed that he is "very plain" which helps him in undercover missions. He is known for his love for badminton, often playing or practicing badminton alone instead of working (he is often caught by his Vice-Commander Hijikata Toushirou and is subsequently roughed up as a result). Despite all this, Yamazaki still often at times get ignored and unnoticed. Prior to the Shinsengumi being officially established, he was originally a punk.

Yamazaki has neck-length black hair and usually wears the Shinsengumi lower-rank outfit. He looks quite plain compared to more colorful Shinsengumi members. His off duty clothes usually consists of a kimono and hakama ensemble with the kimono sometimes patterned. He is often given (forced into) different hairstyles, including but not limited to mohawk, afro, and hair parted and dyed blond for gags. Four year before the start of the manga/anime, Yamazaki was shown with a green mohawk and black hair stripes along the side.

During the events of the Dekoboko Arc he switched genders due to a virus and was seen in his female form. There is little difference except for having longer hair and a bust.

He never goes undercover without equipping himself with the Shinsengumi Sausage. Yamazaki seems to enjoy eating hot dogs and apparently brings them to eat on stake out missions. However, during stakeouts, he tries to limit his diet by eating only anpans with milk; his act of sacrifice to the myriad of gods for a successful operation (or as what the detective dramas say...)

Prior to the Shinsengumi being officially established, he was originally an uptight punk before redeeming himself to Kondou's wisdom. 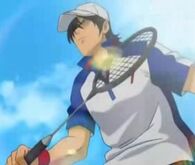 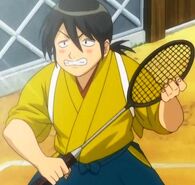 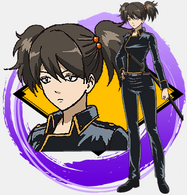 Shisako Yamazaki (Sagaru) in during the events of the Dekoboko Arc

Yamazaki outfit when offday and also in Be Forever Yorozuya 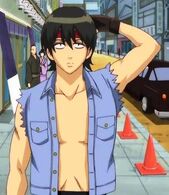 Yamazaki with ninja outfit during spy 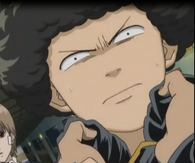 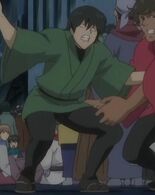 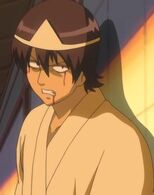 Yamazaki with mohawk and woman dress

Make sparking an anpan to Hijikata in Episode 205

Yamazaki muching an anpan in Episode 219 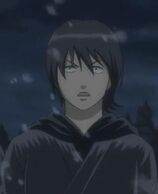 Yamazaki tear of joy to Tama in Episode 268 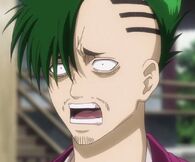 After the Benizakura arc, Toushirou would instruct Yamazaki Sagaru to spy on Gintoki to found out the connection between Katsura and Gintoki. Toushirou would also orders Yamazaki to assassinate him but in the end Yamazaki wrote a school like essay with no crucial information.

In the Otae's Cabaret club. He and his comrade was begging to stop the Marriage of Kondo from the True gorilla. but Otae refuses then bitten up to bits by Otae.

He proved to be one of the loyal follower of Kondou's camp during the eve of Shinsengumi mutiny (Episode 102). He nearly dies during this arc, but Kawakami Bansai allows him to get away. By the time he recovers from his injuries the Shinsengumi believe him dead, and he worries about the reaction he'll get when he appears at his own funeral, but it turns out the funeral is mostly for a dog, and his picture is only in the corner and barely noticed.

During the Character Poll arc he and Shinpachi commiserate over their rankings and the fact that such plain characters as themselves have no chance at beating the more dynamic characters. Yamazaki pretends to try to cheer Shinpachi up, but then is 'attacked' in an embarrassing way lowering his ranking further. He claims that it was a lower ranking character attempting to improve their ranking. This sets up a nasty battle between almost all characters as they attempt to protect their rankings and to bring down higher ranked characters. But it is finally revealed that he faked the attack himself, knowing that it would lead to the infighting and betraying which would eventually lead the fans to turn against all the characters, plunging everyone's ranking to the point where no one would be able to brag about their ranking or look down on anyone else. He and Shinapchi had a heart-to-heart talk over this, and during that talk they raise their ranking to the number one spot. But, while pretending to celebrate their accomplishment, the rest of the characters end up throwing them off a building, returning their rankings to normal.

Courtesan of a Nation Arc

Toushirou knowing that Gintoki is Shiroyasha instructed Yamazaki to spy on Gintoki again, however he is not interested in Gintoki past but those around him mainly Katsura. By using Gintoki as bait, Yamazaki would patiently observe. However Yamazaki at his limit changed his target to Tama who he has fallen for.

Retrieved from "https://gintama.fandom.com/wiki/Yamazaki_Sagaru?oldid=54254"
Community content is available under CC-BY-SA unless otherwise noted.