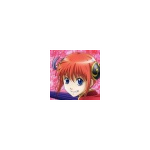 During her childhood Ritsel's parents had passed away from illness. Kondou Isao raise her as his adoptive daughter. Kondou train her sword moves later Kondou gave her a pink whip one week later. After her training one day she met a young boy named Sougo Okita and his sister named Mitsuba Okita. That moment on Ritsel and Sougo train together. The day next she met Hijikata Toushirou one day Ritsel, Sougo, Hijikata and Kondou training togenther.

A few years later Ritsel along with the other Dojo students set off for Edo and subsequently set up the Shinsengumi.

Ritsel appears to be a teenager girl with brown hair tied back in a ponytail and black eyes. She wears butterfry earrings. She has pink lip. And she has pink braces in her teeth in season 5 she no longer has braces.

On her back she has a pink backpack.

Retrieved from "https://gintama.fandom.com/wiki/User:Ritsel?oldid=53783"
Community content is available under CC-BY-SA unless otherwise noted.