Terakado Tsuu (寺門 通) is a newcomer pop idol singer. She is known affectionately by fans as Otsuu or Otsuu-chan.

Tsuu always dreamt of becoming an idol. Even as a child, she would practice her singing voice with her father as an audience. As she is a tone-deaf like her father, he started to laugh at her not being able to sing which agitated Otsuu to say that she will prove to him for sure. Her father then promised that if she ever fulfilled her dream and became an idol, he would bring a million roses to her first live concert.

Before becoming a breakthrough idol, Tsuu was a street-performer, during which Shimura Shinpachi who was the only one who watched her performance and regains his confidence after being scolded by his boss and start up a fan club to thank Otsuu for giving him a reason to live. Tsuu would, later on, build herself up to becoming the popular idol she is today.

She has dark purple hair and brown eyes. She is usually seen with a green microphone. In Episode 56, Tsuu wears a Shinsengumi uniform. 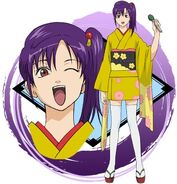 Retrieved from "https://gintama.fandom.com/wiki/Terakado_Tsuu?oldid=64696"
Community content is available under CC-BY-SA unless otherwise noted.