B-Boy
As a Bad boy, he dressed up as a New York gangster style along with his Shinsengumi uniform. He has unnecessary accessories such as the sunglasses, cap and gold chains. He also rolled one of his pants legs up to his knee. He tends to be rude to his peers, and even had a rap battle with Gintoki in the middle of the road (after Gintoki destroyed the car's sound system with his bokuto), but after Gintoki won, he had a sense of respect for him

C-boy
As a Cherry Boy, his appearance is completely different. He has a baby face (which he was trying to mask with his sunglasses earlier) and his eyes are drawn more like an old shoujo manga. 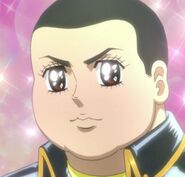 Sasaki without sunglasses and facial hair.

But after Toushirou backed Tetsu when Isaburo bad mouthed him, Tetsu changes into a polite person. Toushirou's influence made Tetsu more hard working, polite and compassionate.