Edit
watch 01:54
Obi-Wan Finale - The Loop
Do you like this video?
Play Sound

Sadaharu (定春 Sadaharu) is a member and a pet of the Yorozuya, but is equivalent to being their mascot. Kagura usually takes care of him, but Sakata Gintoki sometimes has to walk him, much to his dismay. He is also the savior of the earth, preventing an invasion of alien cockroaches in Episode 29.

Sadaharu was originally an Inugami (aka Dog God) of destruction and attack, watched over by the Priestess Sisters Ane and Mone. Sadaharu, along with his counterpart in charge of protection and defense, Komako, were entrusted with guarding the 龍脈 ryuumyaku aka Dragon's Pulse at the 龍穴 ryuuketsu aka Dragon's Lair on Earth but when the Amanto came, they built the Space Terminal over the Dragon's Pulse thus leaving Sadaharu and the sisters without a job. As time passed expenses became too high and they were forced to give Sadaharu away, and so they left him in the custody of the Yorozuya whom he has stayed with ever since. 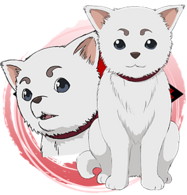 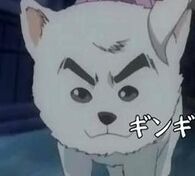 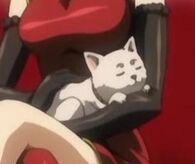 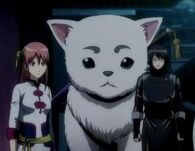 Sadaharu in "Be Forever Yorozuya"

Sadaharu under the kotatsu 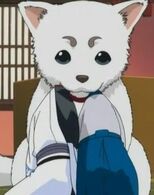 Gintoki and Shinpachi bitten by Sadaharu in Episode 10

Gintoki, Shinpachi, Otae, Kagura, Sadaharu and Hasegawa going to the beach in Episode 19 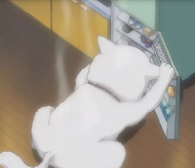 Sadaharu in an alien costume in Episode 41 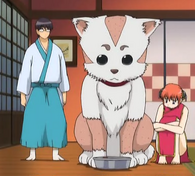 Sadaharu after trimming his fur in Episode 72 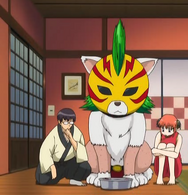 Sadaharu in "Sadaemon Wolf The Mask" in Episode 72 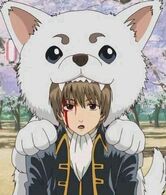 Sadaharu is biting on Sougo's head in Episode 125

Sadaharu is bald in Episode 171

Sadaharu in Gintoki's body in Episode 173 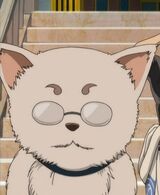 Sadaharu in Yamazaki's body in Episode 289

Sadaharu has the tendency of biting people's heads. A list of head-bitten victims can be found here. Initially, Sadaharu is portrayed as a rather aggressive dog despite appearing peaceful, tending to attack people with Gintoki seemingly being his favorite victim. He disliked listening to orders and tended to do as he pleases, including biting random strangers (to the point they would bleed) and pooping everywhere. After drinking strawberry milk, he transformed into a raging demon.

However, as the series progresses, he seems to calm down as he can usually be seen laying down, sleeping or relaxing alongside the Yorozuya members. He is arguably the closest to Kagura, as she was the one who wanted to keep him the most and convinced Gin to let her keep him. She is often seen riding on Sadaharu's back and playing with him. Because of her strength, she cannot be hurt by his strength and finds his bites as loving, allowing him to become attached to her. He is very playful though also quite destructive and can have a short temper. In addition, he tends to bark towards strangers, implying he is wary of others. Possibly due to being a dog or Inugami (dog God), he can sense things similarly to how Gintoki has a fairly developed sixth sense, being able to see the imaginary Pinko in episode 228. Otherwise, he seems to act like a normal dog and likes taking walks, eating, sleeping, and pooping everywhere. At times he will even eat unusual items such as a plastic figure in episode 129 and cell phones in episode 230. In addition, he seems to develop in intelligence as he is shown being annoyed by Gintoki's laziness and inability to feed him, along with his bad drinking habits that tend to cause him to return late. He similarly demonstrated pity towards Shinpachi for being a lonely otaku with few special skills though Shinpachi is usually the one to take care of feeding and cleaning up after him.

He becomes loyal to Yorozuya including Gintoki, as when Kintoki erases everyone's memories of Gintoki, Sadaharu loyally stays by Gintoki's side despite the fact Kagura does not remember Gintoki and Sadaharu helps everyone remember Gintoki. In the same arc, he demonstrates the ability to understand and respond to Gintoki during the Kintama arc, even making a promise with Gintoki to run forward and distract everyone even if Gintoki himself would be in danger and not look back. He also demonstrated the ability to read directions when he reads the address on a young puppy's collar and goes to the puppy's home in episode 265. He seems to get lonely easily and becomes deeply attached to Yorozuya, enough so that he sacrifices himself to save the world only to save his friends the Yorozuya.

When he is fed with strawberries and milk (Strawberry Milk), he can grow even larger and transform into a ferocious horned monster. To turn him back to his normal self again, the Yorozuya had to team up with Ane and Mone, and play catch using a baseball loaded with the power of genriki (genriki are powers attained through ascetic practices) to trace a five-pointed star charm. Komako is his opposite half, a mini-version of Sadaharu, with the same ability to transform into a ferocious mini-horned version.

Outside of his transformation, Sadaharu was a capable fighter, being able to fight the Amanto troops together with his comrades. As the guardian of the Dragon's Veins, he's capable of holding down the Altana flow within the points. However, this results in him being in a sealed state to keep his body connected to the planet, rending him in between life and death.

He was found outside Yorozuya by Kagura in Episode 10.

Kagura used Sadaharu to give her message to Shinpachi.

Sadaharu was feeling bad so they took him to a veterinary. He had eaten a human-sized doll and he puked it. Katsura appeared and started to talk with Kagura. He said that he came here to show Elizabeth to a doctor. Suddenly, they heard a doctor talking with someone about a dying dog and its dying master.

They escaped with the dog and went out to drink something. Kintarou introduced himself as a planet eater and started to how he came to the earth. Kagura got bored and wanted to go home, but Katsura convinced her to bring Kintarou to his master. They all started to ride on Sadaharu, and go to Kintarou’s master, but the cats, planet pukers, started to pursue them. Katsura tried to convince them and when he failed, he jumped towards them to draw their attention, but the cats didn’t look at him and fell to the ground. Kagura used Kintarou as bait and lots of cats caught him, but Kintarou used his ultimate move Candlelight Last Sparkling, and managed to throw all of the planet pukers.

They took shelter in a park. Kintarou had exhausted himself so he only had five candles left in his life gauge, but Kagura switched one of them with her firework, but it melted one of the candles. Sadaharu extinguished it by pissing on them. Only three candles were left. The old man suddenly appeared in front of them with a leash in his hand and shocked Kintarou. Cats found Kintarou, but Kagura stopped them. Kintarou caught the leash and started to go with the old man.

Kagura, with Sadaharu, later came to the place that old man and Kintarou died and left some flowers for them.

Sadaharu and Elizabeth beat up Tsukuyo and Sarutobi.

Sadaharu and Tama were the only ones unaffected by the sound waves released by Kintoki to erase people's memories of Gintoki, as he is unable to affect machines and animals. After Tama is injured, Sadaharu is the only one by Gintoki's side as Gintoki fights through the now enemy-turned Kabuki district on Sadaharu's back to take down the fake golden light of Kintoki, with Sadaharu's promise to run forward without looking back regardless of what happens to himself. In order to distract the majority of the Kabuki district, Sadaharu carries Gintoki's effigy as Gintoki ventures above the roofs and faces Tsukuyo, Sarutobi, and Kyuubei.

Sadaharu turned into a female horse.

Sadaharu had a confession to make.

In Episode 289, Sadaharu got switched into Yamazaki's body.

Being placed in a sealed state due to using his energy to hold down the Dragon Veins, Kagura took his sealed form to find a way to get him back to normal.

During the final battle in Edo Terminal 2 years later, an explosion sent an aftershock sending Kagura and Shinpachi off the balcony. Sadaharu's true wish of returning to Edo and reunite with the Yorozuya results in breaking the shell of his sealed state, resulting in his revival and saving the trio at the same time. As usual, he bites Gintoki's head after his revival.