Mistakes, glory, good, evil, dreams, deeds, everything in our wake comes on board. This ship is searching for a future where we can all laugh together, even with all that.

Mutsu (陸奥, Mutsu) is the second-in-command of the merchant fleet Kaientai. Despite being Sakamoto Tatsuma's subordinate, she is the one running the company, instead of the usually-disappearing leader. Before then, she was the Vice-Commander of the 2nd Division of the Chidori, a group of space pirates that made money by selling slaves. However, upon learning of their plan to kill her after her father's death, Mutsu ended up being a member of the Kaientai as soon as the pirates' ships were taken over by Sakamoto.

Mutsu was the daughter of the President of the Chidori. As a result, she was raised as a pirate and, at the age of 14, she became the Vice-Commander of the group's 2nd Division, which was completely against her will. During her travels across the universe as a child, she met a younger Umibouzu, whom taught and told her his adventures as an alien hunter and his own past. The young Yato in return appreciates his stories and knows about his past. At some point, the Chidori picked up Sakamoto Tatsuma when he was floating the sea on a haystack. Sakamoto was made a slave and put in jail, where he did his 'business' with the other slaves. It was at this time that Mutsu learnt about "business" from him.

Some time after Sakamoto was picked up, Mutsu's father died. The Chidori planned to kill Mutsu and the slaves to make the supervisor of Chidori their new President. Hearing this, Mutsu decided to use herself as a bait and let the slaves, including Sakamoto, escape; however, in the end, she was saved by them, as they took over all the ships from the pirates and threw them to the sea. Since then, the pirate ships became a merchant fleet known as Kaientai, with Mutsu being the second-in-command under Sakamoto.

During their years of running Kaientai, Mutsu and Sakamoto made a business transaction with Dark Vader. Though, during the negotiation, her boss did nothing but vomiting. While she was out, he misunderstood Dark Vader's placards and eventually agreed with his offer, not knowing that the Amanto's true intention was to take over the Earth. Later, when the negotiation had ended, Mutsu quickly pointed out what was wrong, but Sakamoto ignored her, still believing that the Renho Tribe wanted to protect the Earth.

At one point in the present, when a spaceship crashed into a desert-like planet, and the passengers, including the Yorozuya and Sakamoto, were stuck there, Mutsu came to help them with the Kaientai fleet. Nevertheless, their landing on the planet woke a Sand Bug up and trigger it to attack them. As soon as everyone had been saved by Sakamoto, Mutsu decided to shoot the bug under his order, despite knowing that Sakamoto was still caught by the bug and he would die if she did so. Though, Gintoki intervened the shooting and jumped down to save his friend successfully, leaving Mutsu wondering on what he was thinking then.

Seeing that the Renho Tribe had gone into action, Mutsu and Sakamoto returned to Earth to pick up the Yorozuya, Katsura Kotarou and Fumiko to show them how the Earth had fallen into the tribe's hand and ask them to stop the Renho. As planned, Mutsu tried to make a deal with Dark Vader, thus buying more time for the others to disguise and sneak into the tribe's ship. However, despite her effort to convince him, the negotiation was unsuccessful, and he quickly pointed out that she hid a pistol in her pocket. Mutsu pulled it out and aimed at him, but not before the other Renhos aimed their guns at her. As a result, she, along with the Kaientai crew, was captured and imprisoned.

Not long after, Sakamoto and Gintoki revealed themselves in the center of the Renhos, whereas Katsura and Elizabeth began attacking the ship. Amidst the chaos, Fumiko released Mutsu and her crew. Along with the others, they managed to get out of the Renho's ship and fought against Dark Vader, who was actually the ship's core - Sagi. There, Mutsu used her last plan: Combine their ships into a giant robot called "Kaien." It was then revealed that she had modified the ships without Sakamoto's knowledge. Due to the robot's gigantic size, each of them controlled each part of it, with Mutsu being its right foot. Together, they destroyed Sagi (with Fumiko inside) by a great explosion.

Nevertheless, as Sagi exploded, everyone was caught in the explosion, and they were taken care on the Renho's "Whitezabeth," where their memory about the whole event was cleared by Elizabeth. However, they still managed to remember it and bid a farewell to him when he left.

As Sakamoto introduced his new product - a bag consisting of 50 million yens inside, he gave them away for the girls working in Snack Smile to hold a party and impress Oryou, who rejected him by throwing a rock at his head. Mutsu, angry, put him into one of his bags and had the crew throwing him to the sea. Later, she was seen having a drink with Gintoki, talking about their first meeting with Sakamoto. Meanwhile, Sakamoto, floating on the sea, was picked up by the Chidori for the second time.

When the Chidori threaten to kill Sakamoto if the Kaientai did not surrender, Mutsu fired at their ship without any hesitation, seeing this as a chance to kill Sakamoto by herself. In fact, she used the shooting as a diversion, while she and Gintoki sneaked abroad their ship to save her boss. Having boarded on it, the two attacked the Chidori members. However, when Mutsu got inside a tunnel, it turned out to be a trap, as the doors closed and she was visited by her old subordinates.

In the room where Sakamoto was held captive, she was shown to be beaten by the pirates, seemingly unconscious after going through the tunnel. Actually, Mutsu only pretended after killing all of them. She then woke up and defeated all the pirates surrounding Sakamoto in a matter of seconds. It was not until then that Gintoki learnt that Mutsu was a Yato. When the remaining pirates, including the leader, tried to escape, she threw Sakamoto and Gintoki into the cannons to destroy them. Then, she stopped the escape pod with the pirates inside with one hand and smashed it only by a punch.

After the Chidori pirates had been stuffed into the bags and thrown to the sea, Mutsu was celebrated for returning safely, while Sakamoto and Gintoki were completely ignored. Some time later, she sent the Yorozuya a bag stuffed with radishes as a thanking gift, whereas she and Sakamoto set sail and left the Earth.

By using the information leak within Harusame, Mutsu and Sakamoto's crew were able to rescue Kiheitai's Kawakami Bansai from the attack set up by the latter. She waited for Gintoki, Katsura and their comrades to arrive in the battle to rescue Takasugi.

After the battles in Rakuyou, Mutsu meets Umibouzu again in the ship's emergency room, smiling and saying her wish to hear more of his amazing stories.

After the events of the Rakuyou battle, Mutsu along with Sakamoto, Katsura and his men, Gintoki and his Yorozuya and Tokugawa Nobunobu, were planning to negotiate with the Altana Liberation Army to stop the rising war.

While Gintoki and his Yorozuya went back, the Kaientai and the Jouishishi, with Nobunobu, headed to the Amenotori ship. It seems that Mutsu stayed in one of the Kaientai ships and waited for Sakamoto, Katsura and Nobunobu, who were negotiating with the Admiral Shijaku.

When they were about to leave, Prince Enshou overthrew Shijaku from the Altana Liberation Army leadership and imprisoned him, and then, he imprisoned the Kaientai, including Sakamoto, Nobunobu and Mutsu. At one point, some of the Amenotori staff realized that Enshou activated the Hinokagutsushi, a massive weapon that has the potential of destroying the whole Earth, and so, they sided with Shijaku and released him and the Kaientai, with Nobunobu, Sakamoto and Mutsu.

They headed to were Enshou was to stop him, and through their way they had a lot of fights. When they finally made it to Enshou, Sakamoto shot him down, but Enshou was saved by a collar he always had on him, so he took his beam swords and the fight started for real. Mutsu saved Sakamoto by taking a direct hit from Enshou's beam sword, and so, she was left out of the fight.

When the battle ended, and Enshou and Nobunobu passed away, almost everyone of the Kaientai, Kiheitai (who arrived after they were released) and Jouishishi stayed into the ship. She was treated and, in a moment of consciousness, she saw how an injured Takasugi Shinsuke left his place, but she didn't knew where he was going.

As the Amenotori ship was falling to Earth, she stayed in the ship and waited for the ship to finally crash against the Earth, but she survived.

Two years after the end of the war, Sakamoto put a lot of money into cryptocurrency, but lost it all, which forced him and Mutsu to temporarily disband the Kaientai, so they could gather some money and join the Kaientai again. By now, she works at black market, delivering some illegal merchandise, as she did by delivering a powerful weapon to Shinpachi (curiously bought by government officers and delivered to an innocent citizen by them).

As a Yato, Mutsu has smooth fair skin and constantly wears a sedge hat to protect herself from sunlight. She has brown eyes and light brown, straight hair, which is loosely tied behind her back. She wears a blue suit and a red scarf under a purple cape, with her pants tucked inside her black boots.

Back in her younger days, Mutsu had short hair and wore a cheongsam-like top with a mini skirt and a long coat.

Although she works for Sakamoto, Mutsu is the opposite of him in terms of personality, acting as the real leader of the Kaientai. She is usually calm, collected, and serious. In the Renho Arc, however, she got angry when Sakamoto had been playing Uno instead of thinking of an actual plan to save Earth. She strongly followed what Sakamoto preaches: "Never let your eyes off your duty." - When her own leader got captured, she ensured the safety of the ship's guests before proceeding to help him, even if it meant to kill him. 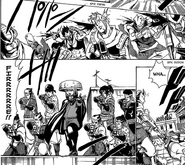 Add a photo to this gallery

Retrieved from "https://gintama.fandom.com/wiki/Mutsu?oldid=63196"
Community content is available under CC-BY-SA unless otherwise noted.