"The final iron that remains here has worked it's way up to be something that can cut any metal in the universe to pieces. They may be our last blade, our last hope."

Kawakami Bansai, also known as Deaf Man (つんぼこと, tsunbo koto) or simply Tsunpo (つんぽ), was a member of the Kiheitai, an extremist Joui faction bent on causing world destruction. Apparently, Bansai serves the Kiheitai as some kind of vice-chief, as he is the only one who's mostly with Takasugi, is, just as Takasugi, called "Bansai-sama" by all his subordinates and is in charge of the Kiheitai members when Takasugi is absent. He was the actual main antagonist of Shinsengumi Crisis Arc. He died during a war on aiding humanity and their alliance with Amantos against the opposing Amanto invaders and Utsuro in Silver Soul Arc.

He is the hit-making music producer for newcomer idol Terakado Tsuu. When producing music for Tsuu, he uses the pseudonym Tsunpo to conceal his identity due to his occupation as an infamous assassin, which makes him a wanted criminal. Tsunpo is a deragotary term for hearing-impaired people. As the Shinsengumi knows about Bansai's appearance, it can be assumed that despite being a very famous producer, he never revealed his face to the media.

Bansai has become a part of the Kiheitai and supported Takasugi Shinsuke since then. As one of the most important members, Bansai serves the Kiheitai with his outstanding assassination skills. He is also in charge of all kinds of negotiations regarding the Kiheitai due to his flawless eloquence.

Bansai has a very fashionable style of clothing, which matches his occupation as a producer. He has styled teal green hair and wears a matching tight coat, which reveals his muscles. He is always seen wearing a pair of sunglasses and also headphones with distinctive yin-yang symbols on the sides. When fighting, he can been seen using a sword which is hidden inside a shamisen. The shamisen itself is also a weapon, with which he used its strings to obstruct Sakata Gintoki's movements in Episode 104. He can also play this instrument, meaning that his shamisen serves as an instrument, a sheath for his sword and a dangerous weapon at the same time.

Bansai without headphones and sunglasses

Bansai fighting for the Yorozuya 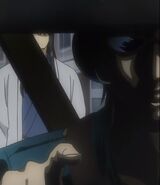 It is uncertain how much Bansai actually picks up from his conversations with other people, seeing as he is always wearing headphones. That is also how he got the nickname Deaf Man when he was introduced in the Benizakura Chapter, as he had been sent to make a deal with the Harusame Space Pirates.[1] He was also instrumental as the go-between for Itou Kamotarou and Kiheitai during the Mutiny Chapter, and seems to somewhat have the role of a negotiator for the Kiheitai. Bansai is a refined and silver-tongued speaker, and uses the olden form of gozaru (ござる), instead of the modern gozaimasu (ございます) when speaking.  Bansai has an seemingly calm demeanor, which covers his vicious, almost cruel personality. Bansai apparently doesn't know how to take a joke as he took Gintoki seriously when he said that it was Bansai who destroyed the hidden bases with his "finger beam" and was preparing to cut off his own finger.

Master Swordsmanship Specialist: He is a highly skilled swordsman, as seen in episode 104 when he managed to stand his ground against Gintoki. He can listen into a person's tune, which can be considered a reflection of that person's mood or spirit. This ultimately led him to spare Yamazaki's life instead of killing him, as seen in Episode 105 of the Mutiny Chapter. In the same episode, Bansai told Takasugi Shinsuke that if he can't get into it (the beat/tune), he backs out immediately, because that's how he does things. In combat Bansai also focuses on the rhythm of his opponent, which can be considered a reflection of his opponents' fighting style. Thus Bansai can predict his opponents' upcoming attacks. Bansai is also capable of using the solid thin strings of his shamisen to chain his opponents and tear their limbs off. His speed allowed him to block every single one of Gintoki's attacks and even dodge a direct attack by jumping in the air while chaining Gintoki's limbs with his strings at the same time (despite not being able to read Gintoki's rhythm). However, not just his speed, but also his physical strength is impressive, as he had no problem holding the struggling Sakata Gintoki in place with his strings. He is also capable of fighting while motorcycling.

Bansai's eloquence also makes him a vital part of the Kiheitai. He is in charge of all kinds of negotiations regarding the Kiheitai due to his silver tongue. He can easily convince people and win them over to his side with his clever way with words. Thus he was able to convince the Harusame to support the Kiheitai in their fight against Katsura's men, as well as make Itou and several Shinsengumi officials betray the Shinsengumi.

Aside from his flawless eloquence and his extraordinary combat skills, Bansai is also extremely intelligent. He was able to manipulate each of Itou Kamatarou's actions and made him go against the Shinsengumi, although Itou was a genius who was by far one of the most intelligent people in the entire Gintama series. With that, Bansai caused the death of several Shinsengumi officials, including Itou himself.

His first appearance was in Episode 56 where he was sitting a bench in the park and reading the newspaper with music on.

He was introduced along with the rest of the Kiheitai in the Benizakura Chapter. He had been sent to negotiate with the Harusame Space Pirates, delivering Gintoki and Katsura's heads to them in return for their cooperation in Takasugi's plans. However, Takasugi's plan failed and both Gintoki and Katsura managed to escape. Kawakami was intrigued by Gintoki's and Katsura's fighting abilities and wanted to duel them one day.

He was also briefly mentioned in Episode 124, where he had left a message to Tsuu saying he sprained his finger when a man with naturally wavy hair (Gintoki) slammed his helicopter, with him in it, to the ground using his bokutou. Because of this, he couldn't produce Tsuu's new album in time for the release date, and she had to write a new song herself (with some help from her friends and fans).

Like the rest of the Kiheitai Bansai joins in Takasugi attempt of the assassination of the Shogun, until it was merely a set caused by Tendoshu and Nobu Nobu, to assassinate the wise Shogun, using Kiheitai as a tool.

After the first act of rebellion by Shige Shige's loyalists against Nobu Nobu, then depart into joining Joui alliance for a rebellion against Nobu Nobu's reign and the Tendoshu. Kiheitai are under attacked by Tendoshu and Harusame while Takasugi is in coma. Bansai tells Kijima to escape with her allies, sacrificing his life to protect a comatosed Takasugi from Naraku's attacks. Leaving Bansai and Takasugi's fate unknown afterwards. Later, it was revealed before the base destroyed by Harusame and Tendoshu, he and Takasugi are separated, whereas Takasugi is under the Yatos' care to the Planet Yato, while Bansai was found and is under care of Kaientai, led by Takasugi old closest ally, Tatsuma Sakamoto.

He's later awaken in Kaientai ship and shocks to see that Kaientai, Katsura's Joi faction and Yorozuya (sans Kagura who follows Matako and Takechi first and left with them) reunite to find and save their old friend, Takasugi in Planet Yato. Despite asking why those three formers are Takasugi's enemies, yet wanted to help him to Bansai, they still consider Takasugi as a friend. This makes Bansai realize the Joi reunion will make a reconciliation with Takasugi, as he later helps them counters Nobu Nobu's detection and ambush, thus capturing the tyrant shogun, making him reveal his true ruthless color to his own subordinate and being shut up by Bansai with a punch.

Once they arrived at Planet Yato, they are founded by Takasugi's two subordinates to find the safe place where Takasugi and Kamui's Yato troop is. However, after seeing the attack on the safe place and goes there to save Takasugi, Bansai and his new found allies are being ambushed by a sudden arrival of Harusame, who first appeared before Yato ship and Kaientai ship does, having most of his two subordinates being killed by the ambushed. All that he and his allies needs to do now is to defend themselves from the Harusame trapsters while going to a now compromised safe place.

He and the rest of the Kiheitai crew come to assist everyone on the Amenotori ship. They then get separated from the group and decide to make their way to the energy circuits to destroy them. Unfortunately, they run into an enemy ambush. He proceeds to tell Takasugi that he won't die until he fulfills his goal, and also promises he'll fight by his side until the very end.

They fight the enemies but one of them ends up shooting Bansai in the torso. He makes the decision to throw his katana at the enemy's rocket launcher, which causes Takasugi and Matako to be blown into safety and ceiling debris to fall blocking the way. He tells them to not worry about him and proceed.

He ends up killing all the enemies, but is extremely weak. Suddenly, while limping toward the door in front of him, it blows up which sends him flying back onto the ground. A new wave of enemies appear but, Okada Nizou and back up shows up to assist Bansai. Okada hands him his shamisen and he somehow manages to stand despite being incredibly weak. He ties strings to the surrounding enemy corpses on the ground, the enemy then shoot a rocket at him. To their surprise, he's still standing but unbeknownst to them he was holding himself up with the strings attached to the enemies.

The enemies walk closer and realize he's actually dead, but also realize he had grenades wrapped around his waist. He's smiling before the grenades explode, killing everyone nearby him.

Community content is available under CC-BY-SA unless otherwise noted.