"I thought I told you...I don't have use for weaklings."

Kamui (神威, Kamui) is a member of the Yato Tribe. He is the son of Umibouzu and Kouka, and the elder brother of Kagura. He is a major antagonist of Yoshiwara in Flames Arc and later after his alliance with Takasugi, becomes one of the main antagonists of the series.

Kamui lived with his parents and his younger sister on Rakuyou when he was young.

As a child, he took over his mother Kouka's responsibilities in doing the house chores and taking care of the then infant Kagura when Kouka fell ill. He also took up the responsibilities to protect his mother and younger sister in the absence of his father Umibouzu, who was seldom around as he was travelling around the universe searching for a cure to Kouka's illness.

Later on, he tried to revive the abandoned Yato tradition of killing one's parent by attempting to kill his father in order to prove his strength. However he only managed to make Umibouzu lose his arm. Umibouzu lost control of his Yato instinct and tried to kill Kamui but his life was spared because of Kagura's plea. He eventually left his home after his failed attempt and became Housen's pupil. Soon after, he became the captain of Harusame's 7th division and later the admiral.

He was also appointed as the Overlord of Yoshiwara after Housen's death in Yoshiwara in Flames arc.

Kamui, like his sister, has blue eyes and vermillion hair, albeit his hair reaches his lower back and is always tied in a braid. He also has a single lock of hair sticking out from the top of his head. Kamui wears a traditional uniform used in Chinese martial arts, with a black and white top sporting elbow length sleeves, and gray pants that reaches the middle of his lower leg. Like all Yatos he has smooth fair skin, and his body is well developed with strong, flexible toned muscles.

He is almost always seen with a cheerful smile on his face even when he is killing, because he believes that everyone deserves a last moment of peace.

It has been shown that women find Kamui very attractive considering how much attention he got when he walked on the streets of Yoshiwara alone. 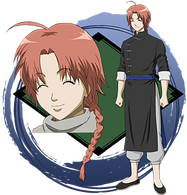 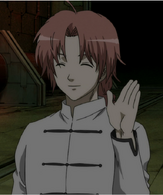 Kamui in his Harusame uniform

Tremendous Strength : Hinted as one of the elites among the Yato race, Kamui is one of the strongest Yato in existence. Naturally, Kamui inherited his father's blood yielding strength able to confidently fight Hosen, the King of Yato. His physical strength is so impressive that he can literally chop up his opponents. He can easily penetrate his opponent's body with his arm and land a finishing blow as shown with Ungyou. He managed to destroy a space ship with one kick.

Tremendous Endurance : Kamui was able to withstand damage from Housen, who was one of the strongest characters introduced in Gintama. Although he took several hits, Kamui was at great health after fighting Housen. Even anesthetic drugs are barely effective against him. When Kamui was injected with a drug strong enough to even knock out an elephant during his fight with Takasugi, he was still able to fight and kill about 20 soldiers before the drug finally knocked him out.

Expert Hand-to-Hand Combatant : Instead of relying on brute force alone, Kamui is shown to be acrobatic in his movements and skillful in his attacks. One of Kamui's attacks alone is absolutely lethal; His incredible physical skills makes it extremely hard to dodge or to block his attacks, while he can easily dodge and block even extremely powerful attacks with his strength and speed.

In a filler episode, Kamui appears to be smarter in comparison to the other Yato members, being able to memorise the multiplication table of 7. He challenged Abuto to calculate 7x6, which the latter couldn't answer.

Typically as a Yato clan member, Kamui is a battle-loving individual, always looking forward to fighting strong people. He has a belief that the Yato members need to always stay on the battlefield, and this is why he disagrees with Housen staying in Yoshiwara as its ruler.

He also believes that having emotional ties to one's family is a weakness, this being the reason he left his family after failing to kill his father. Despite majoring excellently in the fighting field, Housen describes him as ignorant for being too young and not wise enough to understand the reason for his father and Housen's to settle down and appearing less on battlefields.

As Umibouzu stated, Kamui was not always a battle-loving person and seemed to care for his family, and in one instance he hid from his sick mother that he injured his hand. When this changed, Kagura tried to change his mind, but to no avail.

Kamui has stated that he doesn't like to kill women, as they could give birth to strong children with high potential (to presumably fight him). Also, he doesn't seem to like killing children, and he helped Seita meet his foster mother, Hinowa.

Kamui has a sadistic side, which he always shows in battle, most notably during his fights against Housen, Okita and later his younger sister. He also has a habit of smiling during a fight, as this is his way of showing his respect to particularly strong opponents, such as Housen and later Okita

As shown during the Yoshiwara in Flames arc, he appears to have a big appetite (like his younger sister, Kagura), and he is ranked as the biggest eater in the series.

He first appears in Yoshiwara on the pipe walls together with Abuto and Ungyou where they confront Gintoki and the others to retrieve Seita. He had arrived to meet his former master and wishing to meet the woman who made his master "weak". To do so, he planned to kidnap Seita just as he and the Yorozuya were being shown a route out of Yoshiwara to use as a bargaining chip.  Kamui reunites with his little sister Kagura but without hesitation attacks her from behind and ends up destroying the pipe walls.

Later on, Kamui meets with Housen as they speak about his past. Kamui then displays a captured Seita and requests a night with Hinowa, much to Hosen's animosity . Kamui further angers Hosen by calling Yoshiwara a heaven he had made for himself, a prison for a poor neglected old man to keep hold of his cute, little dolls. An angered Housen tells Kamui to be quiet several times but when he refuses he smashes him into the ceiling. However, the one who got smashed into the ceiling was one of the women servants as Kamui had substituted her for Housen's hit. Kamui and Housen then begin to fight much to the dismay of Abuto and Ungyou's opposition. Housen gets the advance at some point but Kamui calmly turns the table and fights back to an equal ground. Kamui and Housen then clash against each other for a powerful strike. The fight is then interrupted by Ungyou and Abuto who stand in their attacks' ways. Kamui accidentally ends up killing Ungyou with his attack as Abuto ends up losing his left arm by Housen. Abuto claims that it was a small price to pay for interrupting the fight. Kamui than leaves and tells Housen that he is not worth killing as he can rot and die in his Yoshiwara world.

Kamui then searches for and finds Seita as he helps him from being captured by Haykka soldiers by brutally killing them. Kamui tells him that he will help him meet his mother and shows him the way to Hinowa's chamber. On the way, several Haykka soldiers try to stop them but everyone got easily killed by Kamui in a brutal way. Kamui explains that he dislikes to kill women as they can give birth to childrens who can grow up to become strong. Kamui and Seita then arrive at Hinowa's chamber as Kamui steps back to let Seita met her himself. After both Housen and Sakata Gintoki arrive at the place and begin to fight, Kamui sits at the sidelines and watches, impressed by Gintoki's power. He takes credit for Housen's death and so is appointed as Yoshiwara's new Overlord. He has no interest in the city, however, and became its ruler solely to prevent anyone from getting close to Gintoki.

Later, Kamui is tricked by the Harusame into thinking they were going to eliminate Takasugi Shinsuke's Kiheitai and Takasugi himself, when the actual target was Kamui himself. At the execution, Takasugi volunteers to strike Kamui down only to instead free him from his bonds. The Kiheitai and 7th Division then both assault the Harusame ship, overwhelming the space pirates. Kamui and Takasugi then leave for Earth together.

Kamui later reappears to assist Takasugi during their assassination attempt on the Shogun. While attempting to sink down a decoy flying ship Kamui encounters Sougo. As he had earlier watched how Sougo fights their men, he though that Sougo reminded him of himself a lot claiming that they both have the eyes of a murderer. And that they both were seeking someone stronger than themselves to fight. Kamui and Sougo then start to fight to the death for a short while before being interrupted by an explosion taking down the ship which carried them, causing Kamui and his subordinates to believe that Sougo fell down along with Soyo Hime. Kamui afterwards starts to have his injuries treated before being able to return to the fight.

Later on, while invading the ninja village Kamui together with Takasugi and his troops ambushes Ayame and Hattori in their secret escape route as they already knew their plans from the get go. But at that moment Gintoki and Kagura jump down to the scene from a hill and engage them both. as Gintoki starts to fight against Takasugi, Kamui and Kagura finally engage in their long waited fight as well. During the fight Kamui compliments Kagura for how violent she has become towards her brother but claims that she is still not strong enough to defeat him. Though Kagura tells him that she is no longer the cry baby that she used to be and that she would protect her home, planet earth, from anything.

However their fight eventually gets interrupted by an ambush attack from Naraku forces as the Tendoshu had appeared to finish off both, the Shogun and the Kiheitai. Because of this Kamui and Kagura temporarily join forces and fight against the Naraku as they rush to their leaders' side. Just as heavily injured Gintoki and Takasugi are about to be overpowered by Naraku forces Kamui and Kagura jump to their rescue as Kamui tells Takasugi off that he cannot die until he have fought against him and repaid his debt. Shortly afterwards the Naraku forces withdraw as Kamui leaves together with Takasugi on his shoulder and Kagura leaves from a different direction with Gintoki on hers facing of farewells to each other.

Retrieved from "https://gintama.fandom.com/wiki/Kamui?oldid=55632"
Community content is available under CC-BY-SA unless otherwise noted.