Hyakka (百華) is Yoshiwara's all-female law enforcement squad formerly deployed by Housen. Its original leader was Jiraia, succeeded by his student, Tsukuyo, who still remains on the post.

While not having a uniform, all members wear similar kimonos with varying designs and obi. They also sport the same shimada hairstyle as any other courtesan in Yoshiwara. With some exceptions, the Hyakka have scars on their faces which are normally hidden behind masks.

The Hyakka, along with Tsukuyo first appear when they intercept Seita and the Yorozuya. They soon leave after Tsukuyo seemingly kills the intruders. They quickly discover their Leader's betrayal and intercept her and the Yorozuya as they try to reach Housen. They cannot bring themselves to kill Tsukuyo, who refuses to fight back, as many of them owe their lives to her. Later, some assist Gintoki in fighting Housen, to little result, while others help Hinowa and Seita escape. They are stopped by the Hyakka who are still loyal to the Night King.

Later, when Jiraia attempts to burn Yoshiwara down, the Hyakka and residents of the city prevent the fire from spreading.

Not much is known about the former Hyakka lead by Jiraia. No subordinates of Jiraia have ever been introduced.

Under Tsukuyo's leadership, many members of the paramilitary force are former prostitutes, who, rather than being killed for attempting to escape, were hidden amidst the Hyakka's ranks by Tsukuyo.

Hyakka they have scar in Episode 142 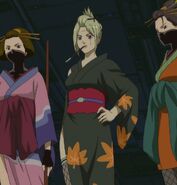 Tsukuyo along with Hyakka in their Genderbent Form

Community content is available under CC-BY-SA unless otherwise noted.