Edit
watch 01:55
Cobra Kai Season 4 - The Loop
Do you like this video?
Play Sound

The Sun of Yoshiwara

We won't find freedom if we simply run.We must fight from inside the cage.If we don't smash through this cage,we'll never obtain true freedom.

Hinowa (日輪), also known as The Sun of Yoshiwara (吉原の太陽), and Yoshiwara Paradise's (吉原桃源郷) is the highest ranking courtesan and de facto leader of Yoshiwara.

She was sold by her parents to Housen when she was a child. Much to Housen's surprise, she was persistent in getting Housen to enjoy the sun more. Because of her cheerful personality, she was popular with clients and other courtesans.

She tried to escape from Yoshiwara with Seita but was caught by Housen and the Hyakka while she was on the surface. Before being captured, she handed Seita to an old man who Housen threatened to kill if Hinowa did not go back. After Hinowa's submission, Housen severed her Achilles' tendons making it impossible for Hinowa to walk or even stand up, to stop her from leaving Yoshiwara ever again.

She has black hair and blue eyes. They say her eyes are so sharp that it reminds one of sunlight. Her face is extremely beautiful.

She is the sun of the eternal night of Yoshiwara, where the women are treated as inmates in a prison, but only her eyes show no signs of weariness, vulgarity or worry. Even though she's stuck underground, her soul remains unbroken. She will never lose her true beauty. All the women of Yoshiwara have great respect for her, and all the men love her, even though she's beyond their reach, as stated by Hosen in Episode 139. However, she has a strong fierce spirit and selflessness as seen how to protect Tsukuyo she fought a catfight with the head courtesan and risked being in trouble for her.

After the Yoshiwara arc, she is alive and well, living with Seita and [[Tsukuyo] in Yoshiwara.

Courtesan of a Nation Arc[] 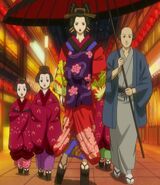 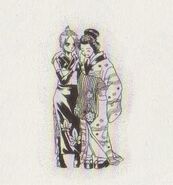