This special episode was released as an OVA in conjunction with “JUMP FESTA・ANIME TOUR '05（ジャンプフェスタ・アニメツアー'05, produced by Sunrise. The TV anime started airing in year 2006 4 April, initially on Tuesdays 7pm on TV Tokyo, before being moved to Thursdays from episode 25 onwards.

Back to Episode List
Go back to Main Page 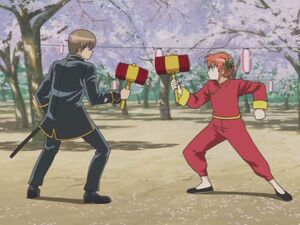 Retrieved from "https://gintama.fandom.com/wiki/Episode_Jump_Festa_Anime_Tour_2005?oldid=63980"
Community content is available under CC-BY-SA unless otherwise noted.