While protecting Gintoki from the stray cats, Hoichi and the cats get caught. Soon Gintoki, Katsura and Kondo goes to save him.

Picking up where it left off, Gintoki remembers Hoichi’s words and Katsura and Kondo fight the Amanto.

The king of the cat Amanto arrives where the strays are being kept, he speaks in Meows which is overdubbed as he speaks. He wishes to use the strays balls to summon Shenlong and revive his own. He needs to find the ones with golden balls so he dumps all the strays into an arena, as a gate opens a monster steps out.

The monster attacks the strays but before it can strike blood sprays from its neck as Hoichi has pounced. He then fights the monster on two legs and the strays wonder why he would fight for them.

The monster easily overpowers Hoichi but in order to protect the strays he keeps on fighting begging for his tattered body to hold together for just a little longer. As the monsters paw comes down, Hoichi remembers Otose talking to him after he had lost his ears to protect a kitten. She compares him to another stray she had picked up.

As he lays unable to move he contemplates his actions and as this happens the monster comes forth to finish him off. The ceiling cracks and Gintoki arrives to rescue him.

He strikes down the monster and yells to the strays that he’s taking Hoichi’s position and asks them what they consider Hoichi to be to them. They then all attack the monster all at once. Katsura and Kondo neuter the Amanto.

As the strays take down the monster, Gintoki and Hoichi talk with Gintoki convincing him to live his life freely, as he stands up Gintoki has disappeared. The strays celebrate their victory.

Gintoki and Katsura find themselves buried from the shoulders down in the grave, Katsura escapes as the Shinsengumi and Kondo who is still a gorilla arrive.

After a parfait, Gintoki walks through the streets passing Hoichi. He sees a message on a wall from Hoichi, thanking him. 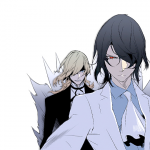