I learned many things from the man with whom I fought with back-to-back. That's why I have no regrets. There is something that I must protect. Even if it means destroying Earth. Even if it means fighting against him. A true friend will always protect a friend's back. That is what I learned from my friend on Earth.

It was later revealed that there are two Elizabeth in the series that accompanies Katsura.

In episode 173, Katsura was accompanied with Russian Elizabeth instead.

Monday Elizabeth
After being abducted and turned into a Renho he adopts the name of General Eren of the Renho race, a race of mercenaries specialized in covert operations, and he, along with many Renho, act as pets for numerous Earthlings in order to prepare Earth for an invasion. It's very likely that this Elizabeth was given to Katsura by Sakamoto Tatsuma since he was the one who brought all the Renho to earth.
Eren replaces regular Elizabeth on Monday, Eren would watch television with Katsura and reinact commerical songs. Eren plays Uno with Katsura a lot, although he's bad at it. Eren would let Katsura win a few times.
Eren was in a relationship with Fumiko before she defected the Renho. It is possible that eren's actions will be attributed to the normal elizabeth, who is currently the only elizabeth, later in the series because the writer may forget the joke, as such the joke and the "monday elizabeth" in its entirety may become non-canon.

This Elizabeth's real name is Dragonia, is the older prince of the planet's Oukoku's Royal family. He was admired by his whole species for both his gigantic chinko and excellent abilities of battle. During a battle he fell off a mountain due to his big chinko, he survived, however he was abducted by the Renho and turned as one of them while he couldn't protect himself.
He accompanies Katsura on Tuesday to Sunday. It was confirmed by Katsura that this Elizabeth was the one that participated in the Benizakura arc.
When Katsura and Elizabeth had argued and fallen out, Katsura found out that he has a wife and a kid. When X-Rayed, there was a fat old man inside.
In the anime the human in Elizabeth is often joked to actually be Takamatsu Shinji the director of the Gintama anime, although this is most likely not canon.

Russian Elizabeth
Also known as Fake Elizabeth. Nothing is known besides that he uses a Bintendo TS (parody of Nintendo DS) to speak and he's Russian. He is perverted and loves hostess club. He's very wealthy.

He is a large duck or penguin-like Amanto with a dull expression, although at certain times it is shown to actually be a Humanoid in a costume.

All the Renho, of which Elizabeth is a member, are in costume almost all the time. The Humanoid inside it is depicted as a dark skinned, sweaty man with hairy legs and glowing pink eyes, but as the director the Human has glasses but continues to have glowing eyes. Later on having grown a short beard and having bloodshot eyes on its costume, maybe from reworking its costume by itself.

Throughout the series he is seen wearing various disguises and has been shown in different styles for gags. 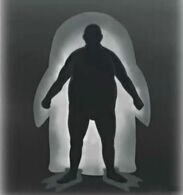 Inside Elizabeth's body through X-Ray

Elizabeth as a female host

Elizabeth as a beggar

Elizabeth as an artist in Episode 15 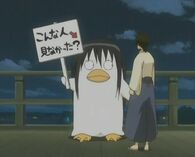 Elizabeth as a goalkeeper in Episode 106

Elizabeth as Erigo13, spoof of Golgo13 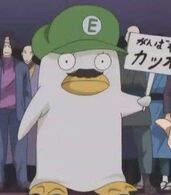 Elizabeth with Takasugi Shinsuke-look-alike in Episode 250

Elizabeth with Katsura as parody characters in "Gintaman"

Elizabeth in a silent movie in Episode 156

Injured Elizabeth with bazooka in Episode 173 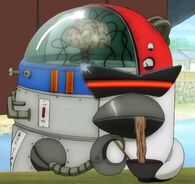 Elizabeth as Cyborg in Episode 150

Tanned Elizabeth as a goalkeeper in Episode 106 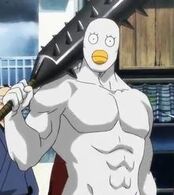 Scary and buffed body Elizabeth in "Be Forever Yorozuya" 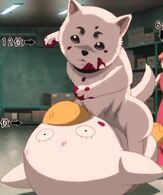 Elizabeth was hit by Sadaharu during Character Poll Arc

Elizabeth as Santa's deer in Episode 204

Elizabeth during Katsura's birthday in Episode 112 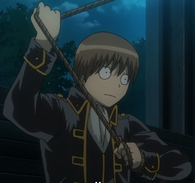 Elizabeth in Sougo's body in Episode 289

Elizabeth and Katsura in Sougo and Kagura's bodies in Episode 289

Elizabeth and katsura in Episode 289

Elizabeth appears as a quiet and dull character at first glance but it can often be insane and extraneous. it is usually never seen speaking and mainly communicates through the use of placards which it can also use as weapons.

Eren Elizabeth
As Eren infiltrated Earth, he started to grown attach to Earth and Katsura. The time he spent with Katsura made him learn a lot of things. He felt guilty with deception and betrayal and can no longer tell who he is but Eren was willing to betray his home planet for the sake of his friends.

Russian Elizabeth
He's extremely perverted that couldn't help himself going to hostess club. He carries a lot of money with him that he used to get everyone on his side.

Normal Elizabeth
Elizabeth is usually seen carrying a placard with it, which it uses to communicate, but also as its main weapon. He has a cannon in his suit shown in Benizakura arc.

Eren Elizabeth
In Episode 39, it was seen being able to shoot lasers from its eyes. Eren Elizabeth is a capable pilot for the Gunsam mecha suit.
Eren is quite flexible, he was able to deflect a rocket from a Bazooka with a kick back at Okita Sougo. He was able to use his Renho suit as a parachute.

Elizabeth was originally given to Katsura by his old acquaintance Sakamoto Tatsuma. Katsura quickly grows fond of the odd Amanto and since first meeting it he has kept Elizabeth by his side ever since. Katsura takes great pride in Elizabeth often considering it a truly charming and sophisticated pet unlike the Yorozuya's violent mascot Sadaharu, who Katsura often considers as inferior in comparison to his Elizabeth, he has even gone so far as to appear on a live TV pet show just to prove that Elizabeth is the better pet even though doing this might have put him at risk of being captured by the Shinsengumi.

When Katsura went missing in the beginning of the Benizakura Chapter, Elizabeth visited Yorozuya for help. While investigating the case Elisabeth waited at the place Katsura went missing hoping that he would eventually return. Later on Elisabeth together with Katsura's faction goes after Kihetai to exact revenge for his attack on Katsura. While storming their airship Elisabeth eventually reuniutes with Katsura who turned out had survived and had infilitrated the ship before them.

Elizabeth was acting weird for a while so Katsura took him to a dentist. They saw a ossan shaped shadow inside of him.

When Sahadaru found out that Elisabeth was higher on the character popularity poll than him he brutally beats him up to a pulp. Though after just a while the both of them join forces to attack the other characters higher than their ranks.

In Episode 267 He and Katsura are playing baseball.

In Episode 289 He and Katsura are switch they bodies. Elizabeth in Sougo's body.

Retrieved from "https://gintama.fandom.com/wiki/Elizabeth?oldid=54904"
Community content is available under CC-BY-SA unless otherwise noted.